Skip to main content
Risk, resilience and gender in the current Petrópolis tragedy

This is the worst tragedy lived by Petrópolis to date, even though floods and landslides are nothing new to this region. According to Agencia Brasil, so far, the Civil Defence was able to count 232 deaths, while over 1,000 people were made homeless. Among the victims, the gender gap is quite expressive: 138 women compared to 94 men. This means that, as of today, about 60% of the victims are women. Similar catastrophic events have hit the city before; in 1988, floods led to 134 deaths, and in 2011, landslides – also provoked by heavy rains – led to 73 fatalities. This comes on top of the on-going pandemic crisis, with a current weekly rate of 5,000 infections and around 70 deaths in the state of Rio de Janeiro. Despite the unprecedented scale of the event, the mechanisms are well-known and this disaster could have been prevented.

Investments, containment, and protection projects cannot be treated as a surprise or an emergency when rains are forecasted for every beginning of the year. Nature is implacable: it does not wait for political election or the end of the sanitary crisis. Yet, the state’s responsibility is huge. If local powers were used to invoke the lack of economic resources for structural protection, now, the bill will be higher: we need new houses, new streets, new plans, indemnities, sanitary adjustments, investment in public health. This comes along with mourning and suffering in the face of loss of human life. Numerous testimonies of families affected by the tragedy are being published. Those are people who lost their spouse, children, grandparents… as well as their homes and living environment.

The areas impacted by the landslides are known to be risky: the 2007 Municipal Risk Reduction Plan indicated the ‘high’ and ‘very high risk’ areas, which were precisely those affected in the city of Petrópolis. Despite the existence of such a plan, persistent problems of land tenure, irregular occupation, increasingly intense rain and lack of proper urban planning, keep putting vulnerable populations at risk in the region. Specifically, in the Morro da Oficina, more than 700 houses were in danger, with more than 240 identified at the highest risk level. Those are the houses of low-income families who are left with little alternatives.

In a text published in 2013, Eduardo Antonio Licco already pointed out the deficiencies in urban planning and early warning systems in Petrópolis. For instance, interviews with victims of the 2011 floods reveal that the noise of the rain covered that of the alert sirens, and that people did not how to proceed in this type of situation. In the face of existing evidence, one could expect that local and federal authorities would have taken more robust actions to protect the inhabitants of Petrópolis.

The politics of death

This tragedy comes at a time where the Brazilian government is already being accused of crimes against humanity for its bad management of the Covid-19 crisis. For so many of us, it feels like human life does not matter to decision-makers. Scholars and social movements alike have referred to the concept of necropolitics, coined by the African author, Achille Mbembe (2003) , which describes the politics of death organized by the state. According Mbembe, in exceptional situations, the state would have an illegitimate use of force to determine who should live and who should die. The abandonment by the Brazilian state of the most vulnerable sections of the population in the face of Covid-19, and now with the landslides in Petrópolis, can be understood as a way of organizing the death of the poorest.

According to mapping conducted by the journal UOL on the Portal of Transparency of the municipality of Petrópolis, in 2021, 2 million BRL (approximately 290,000 GBP) were reserved – but not actually spent – for works of prevention of landslides. In contrast, the marketing and Christmas lighting budget amounted to 5.5 million BRL (approximately 800,000 GBP); twice the budget for disaster prevention. The amount allocated to “scenic, ornamental and decorative lighting for Imperial Christmas 2021” exceeds the resources for containment works in the 1st District – the most affected by the rains – as indicated in the mapping carried out by the Municipal Risk Reduction Plan.

Finally, we can notice the higher death rate for women; out of the 232 fatalities, 138 were women and 94 men. Although it is way too soon to draw definitive conclusions, and keeping in mind that this proportion may change, we can try to suggest some possible explanations.

Many studies show that women are more vulnerable to disasters, because of a combination of factors such as their social roles, lack of access to resources or political marginalisation. Research on floods points to the fact that women tend to feel more responsible for their families, making them less likely to evacuate the affected-area on time, and that once in a shelter, they will take on all the reproductive and caring tasks to keep their families alive (see for instance Siena & Valencio, 2009).

An exemplary case of these gendered-dynamics is women affected by dams, as in the city of Morada Nova de Minas. Since 1960, with the construction of the Três Marias dam, forced migration and reduced income have affected the population, especially women. In 2019, after the rupture of the Brumadinho dam and speculation of water contamination, it was noticed that despite the loss of work and reduced income, women stayed and resisted on their lands, often mentioning their support network, bonds of affection, and cultural connection.

The burden of care work has been widely debated in the context of the pandemic crisis, and existing data show that women have absorbed the core needs of their households during the lockdown period, often at the detriment of their own remunerated job and well-being. In Brazil, a survey conducted by the feminist organisation SOF shows that 50% of women started taking care of someone during the pandemic, while 40% said that the situation of social isolation put the sustainability of their household at risk. Thus, we could imagine that many women, mothers, and spouses, were at home taking care of the house or of someone else.

While rescue services are still working to save lives and identify the names of those missing, we can reflect on the state of public policies in Brazil. Rains are nothing new and they will certainly happen again, so it is time that our elected representative make the right decisions and investments, and start valuing human lives. Local plans for risk reduction and emergency response already exist; all it takes is adequate resources to make them effective. How many more tragedies do we need for governments to take action? 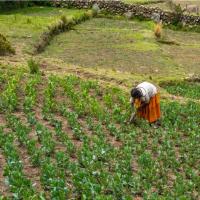 The case for equity to reduce disaster risk: an analysis of Bolivia