One of CUT’s top researchers, Dr Muthoni Masinde walked away with honours at the annual Women in Science Awards (WISA) for her innovative tool that can accurately predict drought-stricken environments for the farming sector.

“For me, getting this award is a lifetime achievement as a scientist; I feel very honoured and sincerely thank DST for the great initiative to honour women scientists. I am more motivated to implement this tool and to ensure that it is accessible to more small-scale farmers in South Africa as well as those in other African countries. My current initiative towards setting up a Drought Mitigation Centre in Free State has greatly been boosted by this Award,” she said.

The tool taps into African indigenous knowledge of natural disasters and augments it with ICT such as artificial intelligence, wireless sensor networks, and mobile phones. This contribution was recognised by the International Telecommunications Union and emerged in the top five in the Union’s Green ICT Application Challenge.

“I developed a novel tool that accurately predicts droughts. The innovation was motivated by the realisation that in most African countries, rain-fed agriculture accounts for over 70% of food production. Further, this production is in the hands of small-scale farmers who continue to rely on their local/indigenous knowledge to reach critical cropping decisions,” she explained.

Dr Masinde’s contribution to drought forecasting solutions for the Free State was recently featured on the BBC World Service and led to the establishment of a unit at the Central University of Technology, Free State (CUT) for research on informatics for drought in Africa. With research and teaching experience spanning 16 years, Dr Masinde was named the winner in the category of Distinguished Young Women Researchers: Research and Innovation, earning R75 000 for advancing science and building knowledge. She obtained her PhD from the University of Cape Town in 2012 and is the Head of the IT Department at CUT. 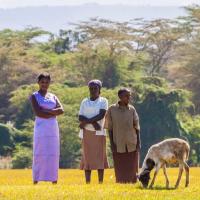