In an interview with Alertnet from the UN Climate Conference in Doha, Nand Kishor Agrawal, coordinator for ICIMOD’s Himalayan Climate Change Adaptation Programme warned that the greater Himalayan region and the downstream areas that rely on it are particularly vulnerable to climate change. He added that "to boost mitigation and adaptation and build the resilience capacity of communities in mountain areas of the world, there is an urgent need to increase understanding of the uncertainties influencing climate change scenarios and water availability in major river basins".

Karin Lexen, director of the Stockholm International Water Institute suggested that water as a resource and a hazard also should be explicitly recognised in any progamme on loss and damage.

Suman Bisht, a gender specialist at ICIMOD in Kathmandu, stated that although women face the main burden of climate change impacts they are not made a high enough priority in the agendas of South Asian mountain countries: “While income from agriculture in mountain countries is falling due to crop failures as a result of unpredictable weather patterns, there is significant rise in men’s outward migration – most of whom fly to Gulf countries in search of labour, leaving their women behind at the mercy of climate change impacts.” 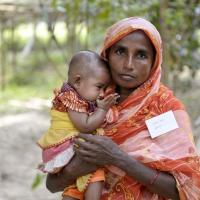 When building climate resilience, women’s needs cannot be an afterthought

Why women? Why now?