A commitment to applying a ‘gender perspective’ to climate-smart planning in Coyuca, Mexico brought to light some uncomfortable truths about bias against women. As a result, local government, researchers and community members are more aware of how women’s and girls’ wellbeing must be addressed through climate resilience programmes.

Coyuca de Benitez on Mexico’s Pacific coast has suffered repeated tropical storms and tidal surges in the past decade. The city, sited on the edge of a 16 km-long lagoon, is a mix of urban and rural land uses, combining city sprawl with traditional fishing and farming activities, and it is home to 30,000 people.

In 2013, Cyclones Ingrid and Manuel damaged 70% of the city of Coyuca, including 2,500 houses, and demolished a bridge and basic drinking water infrastructure.

The storms caused flooding that swept aside boats, cars, bars, sales kiosks and piles of household and business effects.

Intense rain created a tide of foul, floating waste – snagged from the ditches and roadsides where rubbish had previously been tipped. Fresh drinking water supplies were contaminated.

Two years later, a sea surge affected hundreds of people, and then in 2017, Hurricane Max damaged 207 homes and led to declaration of a state of emergency.

These extremes of weather are happening more often than in preceding decades. What is more, climate scientists expect Mexico will be exposed to more frequent tropical storms this century, as a result of climate change.

Investigating a city in climate crisis

A picture of Coyuca in ‘climate crisis’ was detailed through painstaking investigation over the course of 18 months, by a team of researchers in the ‘Coyuca Resiliente al Clima’ (Climate Resilient Coyuca) project – an initiative of the Climate Resilient Cities in Latin America programme. The team created a multi-stakeholder platform composed of local officials, community members and academia, to review and validate the research findings and co-develop a climate resilience strategy for the municipality. See Resilience strategy tackles climate change, governance and gender inequality for details.

The initiative to map Coyuca’s climate risks and vulnerabilities and opportunities for improved urban governance was designed – from the start – to investigate:

Key findings are outlined below.

Community members are becoming accustomed to moving people and property out of harm’s way, at any sign of impending storm and flood. Women tend to be the first defenders.

Society in this part of Guerrero state is starkly divided along gender lines. Women are the primary care-givers: with almost sole responsibility for the welfare and wellbeing of elderly and disabled relatives, children and infants.

To guard from storm-related injuries, women lead in securing others’ safety. They provide food and find drinking water and care for community members who fall sick from water-borne diarrhoeal diseases.

In a cruel twist : there is little access by women to education and the formal labour market and thus to the health rights that are obtained by having fixed and formal employment. Women are in charge of domestic work and caregiving, but it is a kind of ‘selfless’ task. They provide a safety net to others but there is insufficient support for them as carers.

People’s self-help efforts go a long way toward keeping families afloat and providing coping mechanisms. But these efforts could be strengthened if local government stepped up to provide disaster relief and climate-smart urban planning.

Local government’s civil defence actions — in times of extreme weather emergency — have been inadequate or non-existent.

What is more, many of the land use planning and infrastructure investment decisions of local government have made the population even more vulnerable to climate changes such as sea level rise, cyclones and intense rain. For instance, roads and bridges are constructed using materials that increase storm water run-off and the accumulation of water; or infrastructure is built too close to an eroding coastline.

Local decision-making processes, concerning both long-term urban planning and shorter-term emergency responses, have been opaque and hugely male-dominated. Until now, women have been almost completely absent from public decision-making. (This is in spite of Mexicos Law number 494, implemented in 2010 and reformed in 2017, which guarantees equality between women and men.)

A popular local catchphrase identifies women as “Guerreras de Guerrero” or ‘warrior women of Guerrero’. This implies that women are strong, empowered and in command of households; but it contrasts with a social reality marked by a division of labour in terms of gender, stereotypes and roles that limit women’s participation in public decision-making.

The ‘Climate Resilient Coyuca’ initiative created a local platform which has pinpointed the diverse climate related impacts and needs of all groups of citizens. It has developed solutions that could benefit all local people.

This gender-balanced multi-stakeholder platform contributed to and guided several activities:

(a) the climate vulnerability and risk assessment that identified women’s unequal burdens in clean-up and care-giving roles before, during and after extreme weather disasters (see above);

(b) an assessment of local government performance which identified severe gaps in meeting public service needs (above); and

Developing a local adaptation strategy that is owned by multiple sectors and ready for implementation is a significant achievement  – say the authors of a recent report on ‘Climate Resilient Coyuca’.

The project was committed to raising awareness about gender issues from the outset, although grappling with this issue and its relation to climate resilience was by no means easy.

The ‘gender perspective’ had not been incorporated into projects in Coyuca before and it generated new debates. This sometimes led to resistance in the communities. It also led to discomfort among team members when they obtained evidence of problematic behaviours, such as sexual harrassment in emergency shelters and gender-based violence.

These important debates have created an entry point for further awareness-raising work around gender relations and disasters in the future. These are conversations that are critical to have, irrespective of the society’s conservative nature. (Or perhaps the conversations are especially important because the society is conservative and the issues could be ‘buried’ otherwise). Bringing hidden issues to light can ultimately advance women’s and girls’ wellbeing.

The process has seen many decision-makers and community members begin to internalise a more ‘gender aware’ perspective on urban planning. That’s in addition to the steps that Coyuca has made to mainstreaming climate resilience into city planning and management.

The ‘Climate Resilient Coyuca’ project has created new foundations on which the civil society, academic and local government sectors can build for a more socially and environmentally sustainable future. 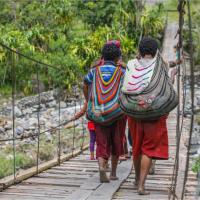