Geneva (United Nations Office for Disaster Risk Reduction) - Local communities, which were often the drivers of disaster resilience, should be more involved in decision-making and disaster planning, said speakers at a panel discussion this morning on community resilience.

The panel discussion, “Community Resilience ‑ The Foundation of Nations”, part of the fourth session of the Global Platform for Disaster Risk Reduction being held here this week, also stressed the key role of training, science and technology, and bottom-up approaches in fostering local communities’ ownership of the processes affecting them.

Anne Akwango, Director, Programs for Development Network for Indigenous Voluntary Associations, Uganda, said that disasters struck especially hard in Africa, where communities lacked the resources to cope. The new global agreement on disaster risk reduction ‑ the second Hyogo Framework for Action (HFA2), to be adopted in 2015 ‑ should establish mechanisms to reflect that reality, and more should be done to help communities at risk, as they were not only those most affected by disasters but also those who drove resilience.

Godavari Dange, Director, Sakhi Federation, India, said that women’s groups in her country had demonstrated great leadership capacity and resilience in the face of extreme weather changes, earthquakes and droughts. They had, for example, taken a number of initiatives to guarantee the subsistence of families in the face of climate change, which was threatening water supplies and severely affecting the most vulnerable groups. Women’s groups were now contributing to the HFA2, but more international assistance would be required.

Jiuta Korovulavula, Regional Disaster Programme Officer, Foundation of the Peoples of the South Pacific International, highlighted what had been accomplished in Fiji by a strong network of civil society groups who collaborated on building resilience. The same spirit of cooperation and inclusiveness should prevail in the HFA2.

Haydee Rodriguez, President, Unión de Cooperativas, Las Brumas, Nicaragua, said her organization had forged many productive partnerships with local authorities and women’s cooperatives. These had resulted in social projects for education, health and agriculture, as well as in the mainstreaming of women’s issues into disaster risk reduction planning.

Jacqueline Araya Montero, Coordinator, Community Emergency Committee at Puerto Viejo, and Social Promoter for Rural Water Systems, Sarapiqui, Costa Rica, described the early warning project that had been implemented at the community level in Heredia Province. It focused on training and on providing information to those most affected by disasters; empowering communities; ensuring coordination with local authorities; and assisting the victims. The project had also helped minimize the severe impacts of floods.

Ms. Akwango said that although progress had been made at the national and international level, more efforts were needed to empower local governments and to build local capacity in the HFA2. Disasters could not be faced in isolation, but required a combination of expertise and efforts. The new global framework should create mechanisms aimed at strengthening partnerships for resilient communities. “There will be no resilient nation without resilient communities, and no resilient planet without resilient nations,” she said.

Alex Byarugaba, Member of Parliament, Isingiro District, Uganda, said that his country was prone to disasters, which disproportionately affected the vulnerable, the persons living with disabilities, the marginalized, and women. Disaster management projects were already in place. It was crucial, however, to involve local communities in the decision-making process; they had considerable local knowledge to share in such aspects of disaster risk reduction as planning, relocation, land use, hazard mapping, information sharing and early warning systems. The HFA2 should build community capacity so that the solutions could be “home-built”.

Nikki Kaye, Minister of Civil Defence, New Zealand, said her country suffered from many of the same hazards as small island developing States. In the wake of the Canterbury earthquakes, when 170,000 houses were demolished and 20 per cent of the nation’s GDP lost, there had been a remarkable community response. An evaluation of community resilience had, however, revealed a need to back local communities, with their strong local knowledge and will, and to strengthen partnerships. These were now the Government’s main priorities.

Marcio Moura Motta, Sub-Secretary for Civil Defense, Rio de Janeiro State, Brazil, noting that his country had undergone many deadly disasters and landslides, described several community preparation measures which had been implemented in response. He underscored the importance of community training and networking as among the main drivers of resilience to disasters. 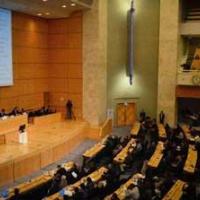 Second session of the Preparatory Committee for the Third United Nations World Conference on Disaster Risk Reduction: summary of the discussion (part 2)