"I am in charge of everything. Our money, our field of millet – even the village's borehole is my responsibility"

MAFOUNDOU, Mauritania (Thomson Reuters Foundation) - Every year when the pastoralist men in Fatima Demba's Mauritanian village return from their months-long journey to find pastures and water, the women erupt in wild celebrations.

"We draw henna tattoos on our bodies, we braid our hair, we wear our nicest clothes," she said, re-adjusting her bright yellow and blue robe.

Yet although she longs for her husband to come home, Demba sees one benefit in his absence.

"I am in charge of everything," she told the Thomson Reuters Foundation, sitting in the shade of a mud-brick hut in Mafoundou village.

"Our money, our field of millet – even the village's borehole is my responsibility."

Prolonged dry spells in this southern region of Mauritania have depleted grazing land, forcing pastoralists to travel ever longer distances to search for food and water for their herds.

"Women pastoralists are the first up in the morning and the last to go to bed at night," said Aminetou Mint Maouloud, who started the country's first association of women herders in 2014.

"Whether it's making butter from cow milk, fetching wood or tending to ill animals, it all comes down to women," she added.

Livestock herding is a traditional way of making a living in West Africa's Sahel, a semi-arid belt below the Sahara, but herders have become increasingly vulnerable to food insecurity as climate change disrupts rain patterns in the region.

That is particularly true in the impoverished desert nation of Mauritania, according to El Hacen Ould Taleb, head of the Groupement National des Associations Pastorales (GNAP), a charity working with pastoralists.

"Transhumance – the seasonal migration of pastoralists and their herds to neighbouring Senegal or Mali – normally starts in October but the rains were so bad last year that people started leaving in August," he said.

His organisation is helping pastoralists find smarter migration routes – with water sources and markets along the way, for example – as part of the British government-funded Building Resilience and Adaptation to Climate Extremes and Disasters (BRACED) programme.

Demba, whose husband has been gone for seven months, says she does not know when he will return.

"He has no choice, he must save our animals," she said, pausing to take a sip of a glass of green mint tea.

In the meantime, "the family depends on me", she added.

Although women play a crucial role in pastoralism, it is rarely acknowledged, according to Mint Maouloud.

"A man will listen to everything his wife whispers on the pillow, but in the morning she won't get any credit for it," she said.

To change that, her association has elected a council of eight women from villages around the country. Together they lobby the country's government on pastoralism issues.

"We tell them where an animal clinic might be needed, or which markets are best for specific kinds of animals," she explained.

Their suggestions could find an unusually understanding ear. Since Mauritania's livestock ministry was created in 2014, both of its leaders have been women.

"We are seeing women becoming more independent, by virtue of being so active economically," she said from her office in Nouakchott, the capital.

In Hadad village, amid stretches of sand and dirt dotted with the odd wilting tree, a dozen women huddle under a large tent covered with striped rugs.

Mariem Mint Lessiyad, a tiny woman with piercing brown eyes, chats energetically to the group, interrupted only by a bleating baby goat.

She leads a cooperative of 100 pastoralist women from nearby villages who buy chickens and sheep to raise and slaughter, selling affordable portions to local families.

"There is less meat going around, so we need to be clever with how we consume it," she said.

They plan to reinvest the surplus in setting up a leather goods business.

"We can't rely on our husbands to support us financially. They are too poor, especially now that they have to spend more money on keeping our animals healthy," Mint Lessiyad said.

Mint Maouloud and her association are trying to persuade financial institutions to make it easier for women to get loans, so groups like Mint Lessiyad's can get ahead.

Access to finance can be problematic, she said, with some banks outright refusing to lend money to women.

"It's important to make women herders more independent financially, so they don't rely on their husbands' generosity or understanding," she added. 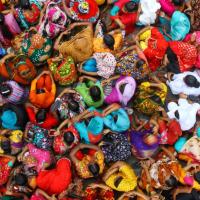 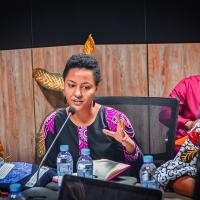