Skip to main content
Connecting with the people beyond the computers: my experience in flood risk management in Buenos Aires

After spending several years in front of a computer every day, I began to feel removed from those people who were the real reason for my work, which aims to build a safer, healthier and more prosperous environment. But when people I knew were directly affected by the issues I was working on, my work took on more meaning and urgency.

As a Senior Water Supply and Sanitation Specialist at the World Bank, I’ve been on both sides of the fence: as someone who works on flood management issues, and also as a person whose life has been directly affected by the repercussions of flooding.

Prior to joining the World Bank, I worked on flood modelling, building, running, calibrating and analyzing water depths and flow velocities. After joining the Bank, I became involved in a $200 million project preparation – the Flood Risk Management Support Project for the City of Buenos Aires. One of the project’s largest investments in infrastructure took place in one of the most affluent neighbourhoods of the city. With the Bank proposing to invest so much money in infrastructure in such an affluent area, I had to ask myself: what did this investment have to do with the World Bank’s twin goals of ending extreme poverty and boosting shared prosperity?

It became clear to my team when we were defining the beneficiaries of the project.  Thanks to a survey done under a transport project, we learned that about 1.7 million people commute daily across the target basins of the project every day – apart from the 1.3 million people that lived in these basins. Among the daily commuters, 50 percent belonged to the lowest quintiles of income.  Undoubtedly, strengthening flood risk management and improving the drainage systems of the city would help some of the most vulnerable communities of the area.

While working on this project, I went on maternity leave. When returning to work, I was lucky enough to know a woman to care for my child.  She was my entire support system.  If she did not show up for work, I couldn’t either.  And because of flooding in Buenos Aires, there were many times that she could not get to work.

The floods were no longer abstract computer models and graphs.  I could see how the floods were impacting the caregiver of my family, and in turn, my own daily life.  I could see the human face behind the computer models. I started to think about the hypothesis that women are among those who were most affected by the flooding. Because as primary caregivers of households, women would have to miss work when the floods prevented access to schools, hospitals, and child and elderly care services.

In this sense, the project is helping the city of Buenos Aires gather gender-disaggregated data to better understand the impact of flooding on different vulnerable groups, including women.

The project implementation, which kicked off on December 2016, is in full swing now. It will ultimately benefit around 3 million people that live and commute daily through the target basins, helping citizens like the person taking care of my kid reach work and access schools and medical facilities, and improving living conditions for thousands of people who live in informal settlements. 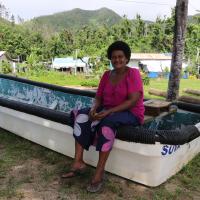 How racial and gender equality are critical for building climate resilience