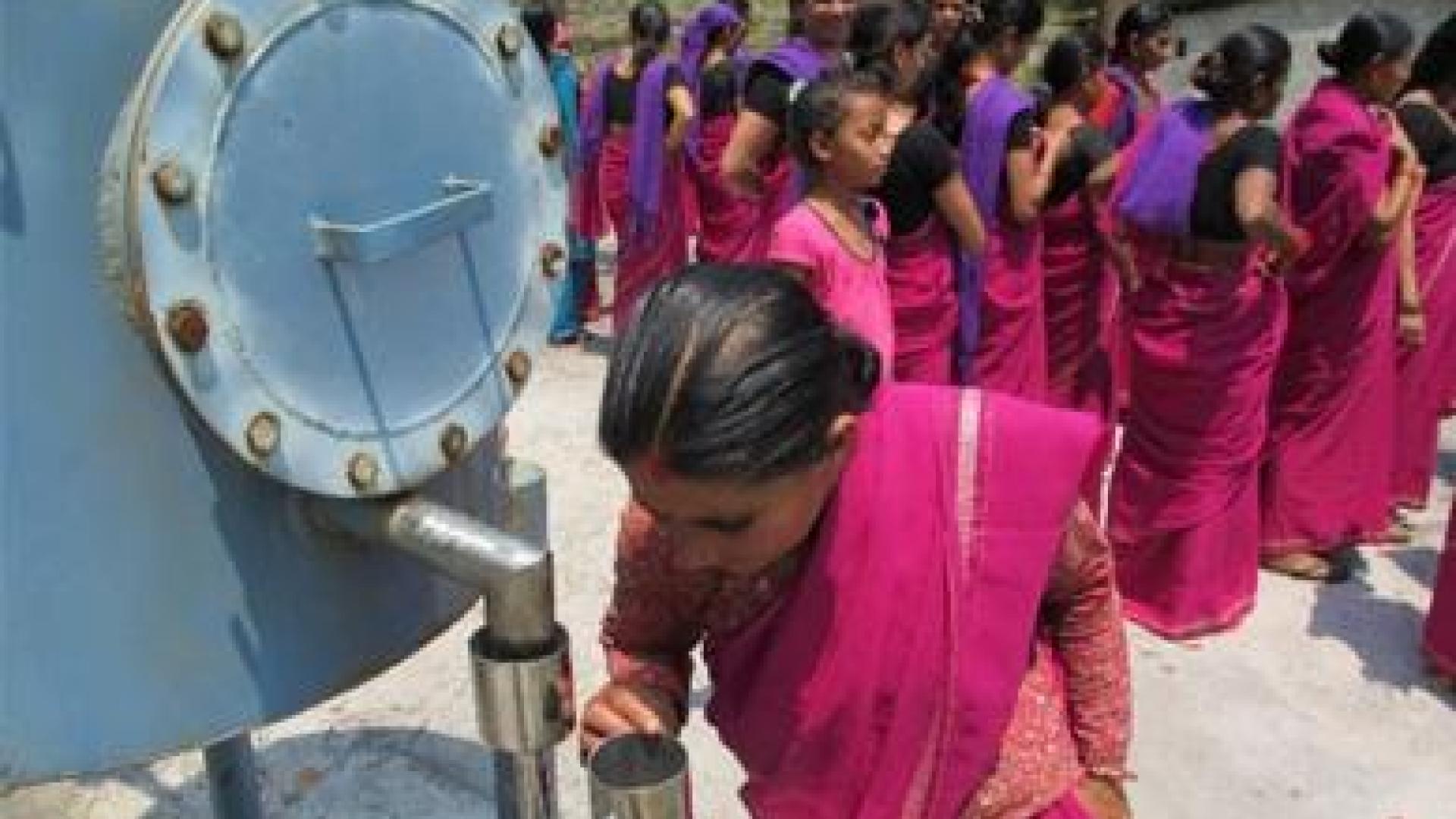 Majthana, Nepal – Life is a daily challenge for the families of this village of terraced maize fields and tin-roofed homes tucked in the steep green foothills of Nepal’s Himalayas.

Monkeys living in the forests around Majhthana carry away many of the vegetables the community grows, and the men who once chucked rocks at them to protect the fields have gone off to dangerous, low-paying construction jobs in the Middle East in an effort to support their families.

The rocky riverbed that runs through town is dry much of the year – except when increasing extreme rainfall leads to flooding that sweeps away homes and fields. Hail, always a problem before the monsoon begins, is getting fiercer, villagers say, and warmer temperatures are for the first time bringing irritating mosquitoes. And the landslide-prone, just-passable earth road leading to town means getting produce to market – or children to school – is an uncertain affair.

But there’s a scent of progress in the air in Majhthana, and today it is citronella.

With outside technical assistance and start-up funding, plus plenty of local labour, the community has begun growing hardy citronella grass and mint on the landslip-prone verges of the forest, and substituting chamomile flowers for one crop of rice or maize in their fields each year. Monkeys won’t touch any of them, villagers say.

The harvested plants are then distilled in a steel tank set up in the village, becoming fragrant oils that can fetch up to $50 a litre – 10 times more than traditional crops – and, crucially, can be easily transported for sale.

“Kathmandu buyers even come here if the volume is sufficient,” said Bhoj Raj Bhurtel, who chairs the village’s new oil-producing cooperative, which involves 69 families farming 20 hectares of land. The oils are raising family incomes by $100 to $150 a year – a boost of 10 to 15 percent, said Luke Colavito, the Nepal director for iDE, an international non-governmental organisation focused on rural livelihoods. It helped bring the project to Majhthana with funds from the U.S. Agency for International Development.

But the oils – and a new water pipe that taps a spring uphill to supply the village with clean water for drinking, irrigation and oil production – are only the start of what community members say they need to adapt to worsening impacts of climate change, and the host of other problems the isolated village faces.

“This is just a first step - one part,” admitted Bhurtel, a slight, serious man with graying hair. “It’s giving us income and relieving us from the monkey problem. But a lot more needs to be done.”

Mountainous, persistently poor Nepal is ranked fourth in the world for vulnerability to the effects of climate change, behind only Bangladesh, India and Madagascar, according to a 2011 assessment by Maplecroft, a global risk assessment firm.

Just 10 days ago, an avalanche on Mt. Everest – linked to climate change by Nepali newspapers – killed 16 Sherpa guides, effectively shutting down this year’s climbing season on the world’s highest mountain.

This week Nepal plays host to an international conference on community-based adaptation to climate change, aimed at finding ways to more effectively develop, fund and carry out changes that could curb worsening climate vulnerability around the world, including in villages like Majhthana.

Right now, the money available for such shifts – from governments and donors – is far too little to protect communities from extreme weather and other threats, experts say. Ensuring what is available is used effectively, isn’t wasted or stolen, and goes to the right kinds of projects – those the communities themselves want –remains an enormous challenge.

While world leaders look for ways to supply a promised $100 billion a year by 2020 to help poorer nations curb their emissions and adapt to climate change, “the poor are already paying the costs with their labour and their time,” said Atiq Rahman, executive director of the Bangladesh Centre for Advanced Studies.

That’s evident in the hills of Majhthana. The village women, who do much of the fieldwork, say planting the new oil crops has been hard work, though the strange plants do seem to be holding up against the monkeys and the hailstorms, and use less water than traditional crops. Their root systems also hold the steep hillside soil, reducing the risk of landslides, Colavito said.

Having access to piped water also now saves women the long hilly walk to fetch water from the nearest spring - a big relief and time saver.

But the women say the problem they worry about most – the growing risk of river flooding, and loss of their homes and fields – remains unaddressed. While the men ask their views about what projects are needed, the women say they have little chance to influence government policy made outside the village.

“We have no real access to the central level (of decision making). No one listens there, and few resources are given to this area,” complained Parwati Adhikari, one community member. “Sometimes they ask us to give our signatures, but women are not actively involved in policymaking. We are only hopeful our ideas will be incorporated.”

With the problem of worsening river flooding unaddressed, “we feel in danger,” added Tilu Lamichana, another village woman. “How do we live here now?”

Whether adaptation efforts can bring enough change to genuinely lower the risks for people like the residents of Majhthana, and protect them from slipping deeper into poverty remains unclear, experts say. Much depends on how quickly and effectively the world curbs climate-changing emissions – or fails to – and whether money to support adaptation is sufficient and spent well.

Even now, “this climate change is becoming intolerable for people and it has to be controlled,” urged Bhurtel, head of the Majhthana cooperative. “I’m optimistic, but many more people need to be aware of this problem.”